MY MEETING WITH GEORGE TAKEI

For you younglings out there, George Takei is the original Mr. Sulu from the 1960s Star Trek television series.  His distinctive, baritone voice is easily recognizable across many generations, his talent as an actor and director is widely acclaimed, and his sense of humor is infectious.  In more recent years, he has "come out" and married his lover and has been an outspoken advocate of Gay causes.

George is just an all around cool guy.

I attended a MysteryCon, I think it was, back in 1978 in Houston, Texas, where I was fortunate enough to meet a few screen celebs wandering around the hotel.  I remember that I futilely accosted Spanky McFarland (of Little Rascals fame) in an empty corridor, which probably scared the poor man to death, because I couldn't think of anything meaningful to say to the guy.

I mean, Spanky was about 50 years old at the time, was still only about 4-1/2 feet tall, his fame had fizzled 40 years earlier, he had tried every profession you can name, and he was essentially making a little extra cash by touring these conventions, talking about the old days and autographing 8x10s.

What was I gonna say to him?  "You sure were cute 45 years ago!"  How does that sound coming from an 18-year-old kid?  Words failed me, so I shook his hand, shrugged and walked away.

By far, the biggest celebs at the convention were Roy Rogers and his wife Dale Evans, and I qualify that statement with the fact that his appearance and gunslinging demonstration had PACKED a large conference room beyond its capacity. I haven't seen too many celebs create such a stir. Elbow-to-elbow, standing room only, I'm guessing there were over 300 people jammed into a room meant to accommodate 100. Definitely a fire code violation.

So Roy was wowing the crowd, twirling his six-guns (he was definitely still on top of his game), and I was standing near the back of the chamber, just drinking it in. The whole room was IN LOVE with Roy Rogers.

As I was focused on the show, this guy comes squeezing his way into the mass of humanity, steps in front of me, and almost pushes me off balance trying to get a gander of Roy and Dale. I was a little miffed, okay, and was about to say something confrontational, when the guy turns to me with this big grin across his face and exclaims like an overgrown kid, "HE'S GREAT, ISN'T HE?!"

Well, yes, it was George Takei, who for a few moments was as anonymous as all the other Roy Rogers fans in the crowd. I was astounded. Nobody noticed George Takei sneaking into the room, except me, and I was having heart palpitations — I mean, like, here are two of my all-time favorite celebrities in the same room, and one of them was standing on my foot. 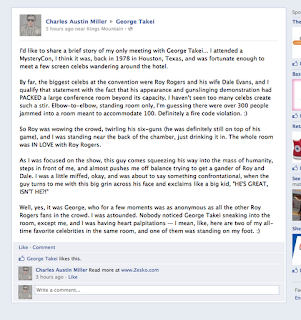 (Incidentally, George Takei LIKED this blast from the past.  I'm more than honored.)