Justice in the Zimmerman Trial Challenged by Black Community

Now Barack Obama has ineffectually chimed in on the acquittal of George Zimmerman, implying that justice was not done in the criminal trial, despite overwhelming evidence that Zimmerman was physically assaulted by Trayvon Martin. In other words, Barack Obama is politicizing a legitimate trial and jury verdict in order to FURTHER divide America.

The prosecution was driven primarily by racial bias.


Last week, black Hollywood actor Lance Gross penned an open letter to George Zimmerman in which Gross ominously predicted: "For the rest of your life you are now going to feel what its like to be a black man in America." This quote was picked up and echoed by many in the black community, implying that Zimmerman would never again feel safe in public.

What goes around comes around. 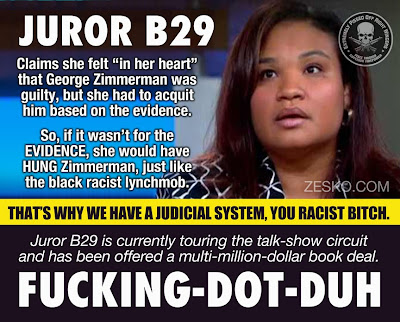