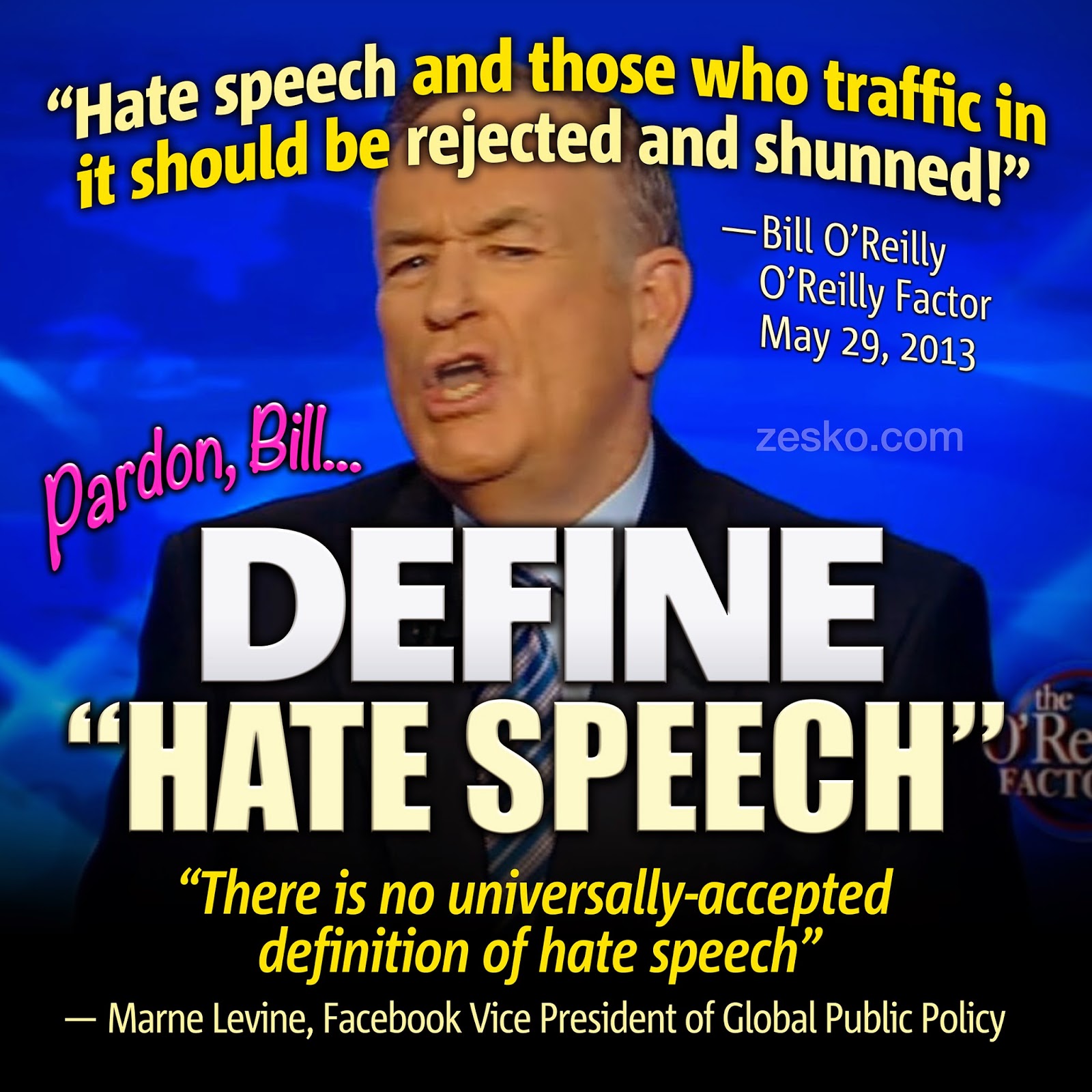 I've never liked Bill O'Reilly for his two-faced, flip-flopping, Left-leaning hypocrisy — he even recently called Barack Obama an "American Patriot." I mean, O'Reilly is a ranting "conservative-in-name-only" (not unlike Glenn Beck) who parrots the Socialist talking points on "Hate Speech" more often than not.

Most bizarre is the fact that Marne Levine, the Facebook VP of Global Public Policy, has publicly (perhaps accidentally) conceded that there is NO "universally-accepted definition of Hate Speech..."  Bizarre, that is, coming from Facebook, which selectively targets "Hate Speech" with an unmistakable bias against Conservative and Right-wing pages while ignoring some truly threatening Left-wing pages.


In the Don Sterling racism scandal, this white NBA team owner's privately recorded "Hate Speech" was sensationally made public, and Sterling was severely punished; Sterling was banished from the NBA, in fact, and fined $2.5 Million.  Yet, when a righteously-incensed Larry Johnson (a black player-turned-NBA-executive) responded by threatening to form an all-black basketball league that bans whites, Johnson caught no heat at all, even though his speech was far more racist than Sterling's.

In the same week, we heard the plans of U.S. Senator Ed Markey (a Massachusetts Liberal Democrat, of course), who is introducing a bill called the Hate Crime Reporting Act of 2014, which would empower the Federal Government to "scour the Internet" for violence-inciting "Hate Speech" (a virtual cyber-witch-hunt) and somehow censor the purveyors of such hateful, brutish language...

Harvey Silverglate, a civil liberties attorney based in Massachussetts, says, “It is not up to Sen. Markey, nor to the federal government, to define for a free people what speech is and is not acceptable.” For once, I find myself in wholehearted agreement with an attorney.

There are also movements on school campuses nationwide to ban certain words and phrases that student use, with the ultimate objective of changing institutional policy, governmental policy, and social policy...

Based on the afore-mentioned instances of Socialist censorship — not to mention many others — Liberal Socialists are essentially redefining "hate speech" every day... Broadening their target, as it were.

The mainstream media and Federal Government are gearing up to drive the 2014 mid-term election on the issues of Racism and Intolerance, so they need several recent examples of White-on-Black Racism, Intolerance toward Illegal Aliens, Bullying, and Hate-Speech.

Racism, Intolerance and "Hate Speech" are Liberal red herrings that have NO BEARING on the mid-term election (nor anything else), but they do divert and stir up the low-information Liberal voters.

"Hate speech" or not, we're looking at an all-out assault on Free Speech and Free Thought.

My point is that anybody can point his crooked, trembling finger at any image, at any word, at any phrase and call it "offensive" or "hateful" or "discriminatory" or "racist," and the Socialist Inquisition will swoop in to eradicate those images and words and phrases...and people.

Where there is a War on Hate Speech with no definition of "Hate Speech," all speech is in jeopardy.