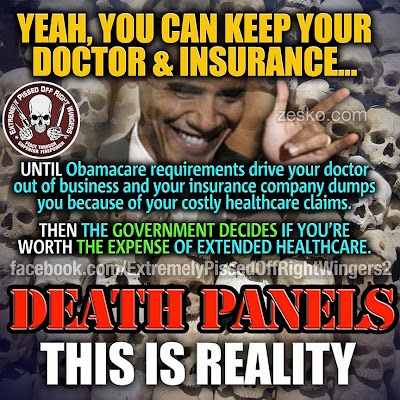 Untold millions of Americans are going to be thrown under the bus by National Health Care. Those who will suffer most will be the elderly and infirm, because there's no reason to keep them alive under Obamacare. They are a burden on insurance companies and corporations that pay out pensions. With the elderly out of the way, Obamacare can focus on YOUNG people who actually produce goods and services and generate tax revenue.

Which is how all this shit ultimately boils down... It's not about health or compassion or life or death... It's all about money and power, and those sinister impostors in Washington wiping their asses with dollar bills that WE are driven to provide. When we don't generate that revenue, it hurts THEIR plans in Washington.

So, it appears that Obamacare will kill off the non-contributors and reward the slaves who perform satisfactorily.

Like a hive of bees tending to the queen and the eggs, and ejecting the elderly, weak, and infirm without a care.  For the good of the hive.  Only the existential continuity of the HIVE matters.

Alas for Socialism, humanity is NOT a hive-building, insectoid species.  We're warm-blooded mammals who live in FAMILIES that comprise TRIBES.  We are NOT narrow-minded, specialized, tunnel-visioned, Socialist drones.

For the life of me, whoever came up with the idea that human beings should behave as do insects?  Who thinks this is a good idea?

Do you all seriously NOT suspect that there is a higher agency behind all this?

People, the fact is that humans run in cycles and we collectively cycle through oppression and rebellion and dominance and submission, over and over and over, all the way back to the dimmest ages of man.  Whoever it is — gods, demons, angels, UFOs, Socialists, take your pick — there's always been a fairly discernible pattern of SOMEBODY trying to nag us and nanny us into performing specialized tasks and depending on a collective...like insects.

Why is it that Communism (the HIVE State) keeps resurfacing?  Who the fuck thinks Communism is a good idea?  Who's pushing this agenda across the millennia?

Hm.  There is nothing new upon this planet.  But there are many, many OLD things here.