The Rodgers Killing Spree: Families of BOTH Murderer and Victim BLAME the U.S. Constitution 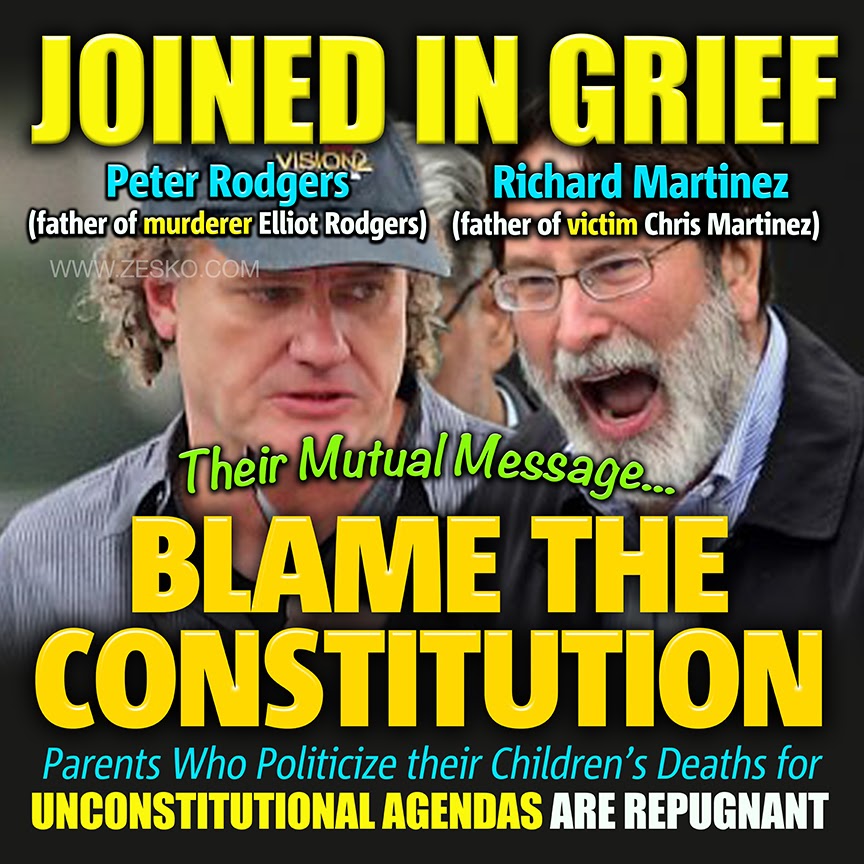 So, a Liberal California attorney and a Liberal Hollywood director are going to team up and put an end to LEGAL gun ownership, because Elliot Rodgers killed 3 people with a gun AFTER killing 3 people with a KNIFE, right. Who's teaming up to ban KNIVES, I ask you? Put the blame where it BELONGS — on a MENTAL PATIENT who had been in psychotherapy since he was 8 years old.

I mean, I UNDERSTAND that both the Liberal attorney and the Liberal director are grieving the loss of their sons through an act of senseless, psychotic violence. But are they SERIOUSLY arguing that the CONSTITUTION and the SECOND AMENDMENT are to blame for their shared grief?

It sounds more to me as though these two hardcore LIBERALS are going to POLITICIZE their grief and exact punishment against the RIGHTS of the American people, with the objective of DISARMING all Americans and handing ALL the firepower to the GOVERNMENT.

Which is INSANE. Perhaps they're insane with GRIEF. But insanity is STILL insanity, regardless of the cause.

If these two privileged Liberals mutually agree to POLITICIZE their loss and their grief for an unconstitutional agenda, I find that morally REPUGNANT.

Why isn't this attorney SUING the director for being a SHITTY FATHER who kept his homicidal son in psychotherapy for 14 years, but who couldn't keep a knife and a gun out of his hands?

Elliot Rodgers' parents KNEW that he was a nutbag since he was 8 years old, which is when they put him into psychotherapy. That's 14 years of KNOWING that the kid was UNSAFE.

Elliots' family CALLED THE POLICE on him a WEEK BEFORE he killed everybody. So the family KNEW he was dangerous. Elliot was WRITING all sorts of insane shit in social media, so EVERYBODY ELSE knew he was a nutbag, too.

But the police actually INTERVIEWED Elliot and found him to be "nice and polite"...so the police just walked away.

Does that not sound WEIRD?

Does it not sound WEIRD that a KNOWN mental patient was reported by his own family, but law enforcement officials DIDN'T CHECK to see if he had purchased 3 handguns and 500 rounds of ammo? They didn't CHECK social media to see his insane, homicidal rants?

To me, this sounds like a JANFU... Joint Army/Navy Fuck-Up. The FAMILY fucked up, the LAW ENFORCEMENT fucked up, shrugged their shoulders, walked away.

Now his Liberal dad and the Liberal dad of his victim are going to attack the CONSTITUTION, to avoid blaming the NUTBAG and the FAILURE of the nutbag's PARENTS?