SONIC Drive-Ins and Other Restaurants Announce a BAN on Guns... 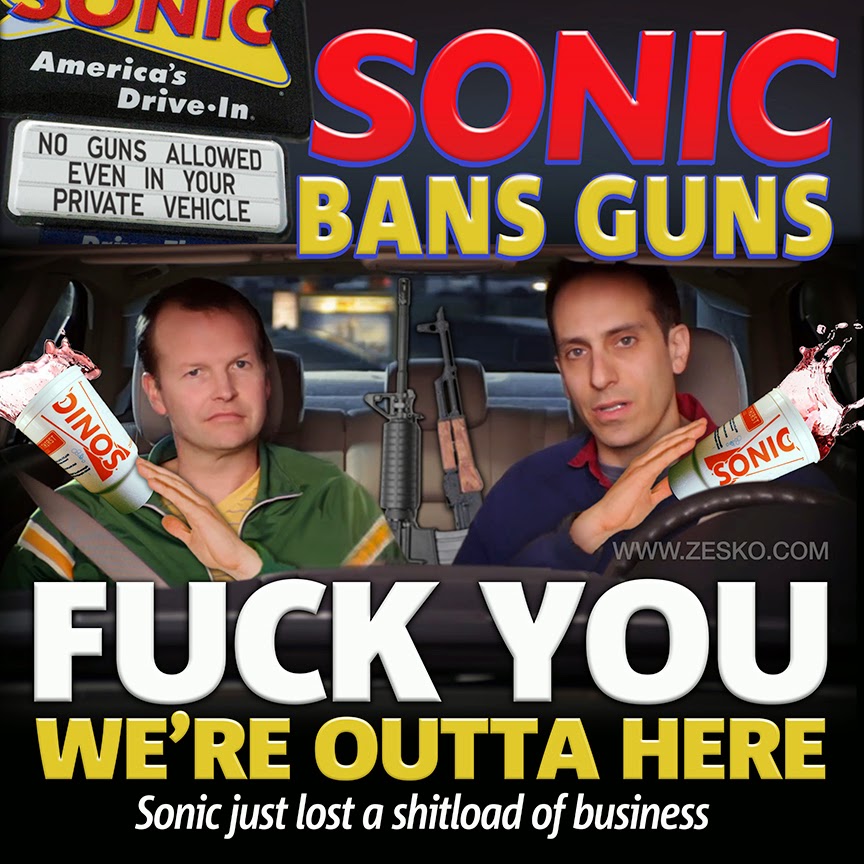 "SONIC confirmed that franchises will prohibit guns on all properties, but that they will refer to local laws if they see guns inside cars at drive-ins."  — MSNBC

You know what's ironic, or at least redundant?  Chili's Bar & Grill publicly announced the same thing, that guns aren't permitted on the premises.  Thing is, state and federal laws ALREADY prohibit carrying firearms into businesses that sell and serve alcohol.  Chili's, as you know, is as well known as a bar as it is a restaurant.

As we gun owners who have taken concealed carry courses know, one of the conditions of our permits is that we DO NOT carry into businesses that sell/serve alcohol... That means convenience stores, sports bars, restaurant/bars, public events where alcohol is served, etc.  So, Chili's announcement is pure lip-service, a political anti-gun statement to appease the spineless, cowardly anti-gun crowd.  It means NOTHING.

Another condition is that we don't carry in businesses that post a little 8x10 sign in the window, saying, "No Weapons Permitted"... That's fine, we have no problem with that.  But what we're seeing today at many Left-wing businesses across the country is GRANDSTANDING, making PUBLIC ANNOUNCEMENTS to the WORLD that they WILL NOT TOLERATE guns.  And that is nothing but political posturing for a Left-wing agenda.

Again, it means NOTHING.

In fact, those businesses that are announcing "gun-free zones" — such as Jack-in the Box, Chipotle's, and many other Left-leaning businesses — are NOT promoting safety and security.  In recent days, several of those businesses that publicly ANNOUNCED such anti-gun stances have been robbed at gunpoint...by people who DON'T GIVE TWO SHITS about the LAW.

These are businesses that are pandering to Left-wing, unconstitutional pressure to OUTLAW GUNS on as many properties as possible, which is a prelude to banning guns in public AND in private.