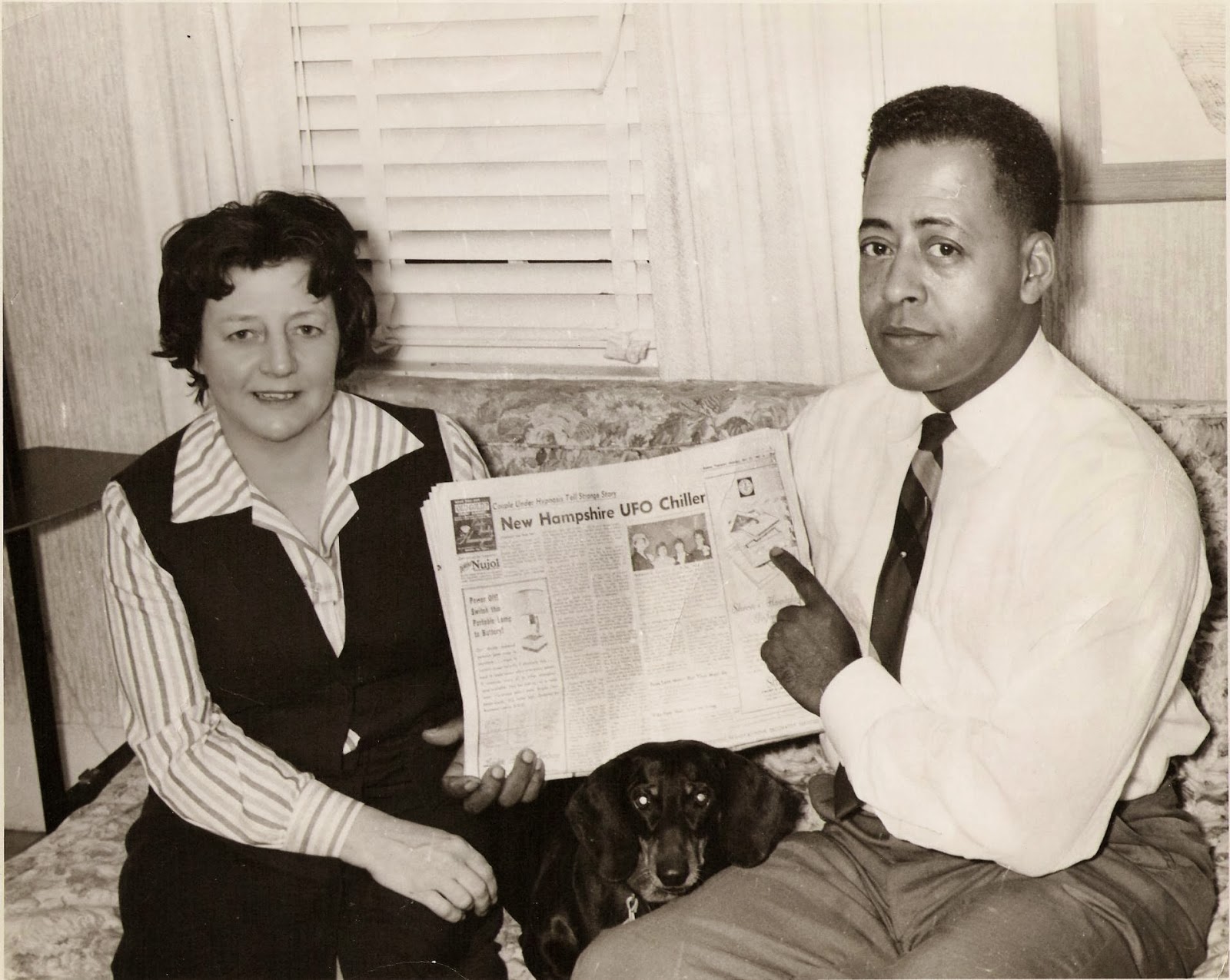 First off, I'm just going to assume that you know this classic case from the annals of UFO lore.  If not, READ ABOUT IT HERE...

The Betty and Barney Hill abduction case in 1961 was only the first SENSATIONALIZED “alien abduction” case in the United States. In point of fact, there were several people (mainly huxters) in the 1950s who claimed to have “gone for a ride” on UFOs.

But what I want to know is WHY every paranormal television treatment of the Betty and Barney Hill Case for the last 40 years consistently OMITS the most interesting detail of the case?

See, during his very first hypnotic regression, Barney gave a REALLY DETAILED and intriguing description of the UFO and the abductors. He described their uniforms as tight, glossy black, with black military-style officer caps — appearing, to Barney's great alarm, like “German Nazis”…

Those were Barney’s words. Barney had served in the military in WWII; so, whether or not he actually fought in the European theatre of operations, he surely KNEW what "German Nazis" looked like.

The “German Nazi” description is documented from Barney’s tape-recorded hypnosis sessions, and that detail actually WAS included in the 1975 television movie “The UFO Incident” (starring James Earl Jones as Barney Hill).

But WHY would all subsequent paranormal TV programs for the next 40 years deliberately OMIT that particular and undeniably sensational detail of the Betty and Barney Hill Case?

I mean, most of today's paranormal TV programs have gotten aboard the "Nazi UFO" conspiracy — speculating on Foo Fighters, Nazi Flying Saucers, the Nazi Bell, as well as the possibility that the USA continued Nazi UFO research and development following WWII. But these paranormal programs consistently FAIL to make a Nazi UFO connection in the Betty and Barney Hill Case.

I mean, if Nazis actually DID develop flying saucer technology and brought it to the USA, wouldn’t the 1961 Betty and Barney Hill Case be the earliest public confirmation of Nazi UFOs?

Well, realistically, I can GUESS why all these paranormal TV shows have omitted many of Barney's claims. Barney wasn't a very consistent UFO witness; it seems that, every time he was questioned about his experience, Barney would CHANGE his story a little.

In his very FIRST hypnosis session, he described the UFO occupants as looking like "German Nazis," dressed in tight-fitting glossy black uniforms with officer caps. In his NEXT account of the abduction, Barney said only ONE of the abductors (the "Leader") was wearing a Nazi uniform, and all the others were wearing brownish fatigues. The NEXT time Barney recounted his story, he said there was also a red-haired guy who looked like an Irishman.

Fact is, you couldn't get the same story twice out of Barney Hill.

Within a few years, after retelling his story under hypnosis and in the press several times, Barney's story had changed so much that his UFO abductors had morphed into big-headed, grayish aliens with large wrap-around eyes (in other words, your standard-issue Outer Limits alien). The "Nazi" description had disappeared, as had the red-headed Irishman and several other details from his initial accounts.

Barney's is a classic example of the UFO witness who continually re-imagines his experience as he receives more and more feedback and publicity. His memories are manipulated by repeated hypnotic suggestion; he becomes more aware of UFO-related imagery in the press and entertainment; he becomes aware of which details are more popular with the public; and, consciously or not, he completely changes his story over time.

Unless, of course, it was all a hoax.

Admittedly, Betty's "research" into UFOs continued for the rest of her life, long after Barney suddenly died of a brain hemorrhage in 1969 (he was pretty high-strung already, and the pressure of publicity probably killed him early). Betty's version of the story became more and more bizarre over the years, including her descriptions of "star maps" and all of the typical stuff that UFO enthusiasts pay to see and hear.